interview by fnl fashion at the nautica fashion show february 2013

Martha Stewart Show (Click on the link for the videos) 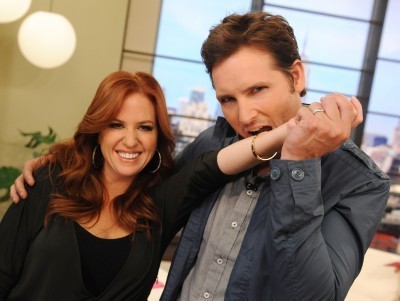 Prankster and all-around nice guy Peter Facinelli dropped by the On Air with Ryan Seacrest Coca-Cola Studio on the red carpet of the "Twilight: Breaking Dawn - Part II" world premiere. Talking to guest host Ariana Grande, Facinelli showed us his new dance and described his infamous on set pranks.﻿

interview by clevver tv with peter facinelli at the breaking dawn part 2 premiere in l.a november 12 2012

peter facinelli and elizabeth reaser talking about the twilight finale

Peter Facinelli and Elizabeth Reaser talk with Access about how "sad" now that "The Twilight Saga" is ending. Also, Peter tells Access how the final battle scene is different from author Stephenie Meyer's novels.

Elaine: "Back in August, Peter Facinelli did a quick pit stop in the UK and I was lucky enough to be given the opportunity to chat with him about Breaking Dawn Part 2. Those who submitted questions might recognise them, but on the whole Peter just talks and talks so I just went with the flow!! Enjoy!﻿"

Peter Facinelli came out to Times Sqaure to meet fans and show a new outdoor men's line. He chatted - and talked salsa - with AXSLive.﻿

Peter answered a series of questions from Facebook fans.

The first question: "What has been your favorite role?"

loosies behind the scenes

Peter sits down and has a nice little chat with Marlena Katene at the SupaNova convention in Melbourne.

Thanks again to Marlena for the permission to add the video to our site and the nice little chat on YouTube :) Don´t forget to check out Marlena´s YouTube Channel for more interviews.

Visit msnbc.com for breaking news, world news, and news about the economy

Twilight star Peter Facinelli gets loose with host Robin Milling to talk about his triple threat of writer, star and producer of Loosies.

Peter learned the fine art of pickpocketing to play one in the film and tells Robin how he would often snag wallets from unsuspecting fellow cast members.

He also reveals some Twilight trade secrets and much more!

Listen to internet radio with Milling About on Blog Talk Radio

Celebuzz and Fantapper Live chat with Peter before

If you only know Peter Facinelli as flaxen-haired Cullen patriarch Carlisle, prepare to see a whole new (criminal!) side of the actor when his screenwriting debut, "Loosies," opens today. Peter stars in the independent film as Bobby, a pick-pocket who accidentally impregnates a girl during their one-night stand. (What would Esme say?!)

We sat down with Peter to get all the dish on his romance caper but, of course, talk inevitably turned to "The Twilight Saga," whose final installment hits theaters November 16. Though he has yet to see any footage from the highly anticipated release, Peter was more than happy to share a bit about the scope of the grandiose production.

"It's cool because 'Part 1' felt like a throw back to 'Twilight' because all of a sudden it got compressed and more intimate," he explained. "And it was about the family, like 'Twilight' was. 'New Moon' became about the vampires and more about the werewolves, and then 'Eclipse' became vampires and werewolves, so it was this huge ensemble. So 'Part 1' went back to that original core again, which was kind of nice. Now, the second part gets big with a tremendous cast."

Of course, one of those newbies filling out the lineup is young actress Mackenzie Foy, who portrays Bella and Edward's daughter Renesmee. And by extension, Carlisle's granddaughter. But just don't ask Peter how he feels playing a grandfather at the age of 38.

"I don't like to talk about that much," he said with a hearty laugh.

Peter Facinelli on "The Talk"

(This video is not availabe in all geographic areas)

Peter takes you on a private Tour of his RV

Twilight fans get ready for this... Peter Facinelli a.k.a. Dr. Carlisle Cullen joined us on Studio10!

The actor talks about the latest Twilight installment "Breaking Dawn: Part One". Facinelli tells us what it's like to be a part of the Twilight phenomenon.

Facinelli also talks about other current and future projects he's working on including a movie that he wrote and produced.

Peter Facinelli Interview about Nurse Jackie and his life - August 2011