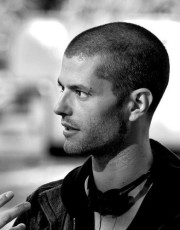 Could you tell us a little bit about yourself?

I was born and raised in Barcelona and started my professional career in the movie industry as a special make up effects technician in the late 90's. El Ciclo, a short film I directed back in 2003, got the attention from the Hollywood industry and that's when I started flying back and forth between Barcelona and LA till I got my first directing job: Return to House on Haunted Hill.

Gallows Hill is your debut original feature film. How does it feel and are you excited about it?

I'm extremely excited about it and the fact it's not part of a franchise has given me the opportunity to explore a different visual style and allowed me to take a more adult approach to the material keeping myself away from the typical studio constrains.

You've done a lot of work in the horror genre. What is it about that genre you like and do you enjoy freaking people out?

There's something about the horror genre that allows you to explore very dark and interesting subject matters that you wouldn't be able to explore in other genres.

Working with Peter has been, so far, one of the most gratifying experiences in my career as a director. He's very intense, passionate and humble, his mind works 24/7 and is always trying to improve the story with all kind of different ideas. I've learned a lot from him and we had the exact same movie in mind, which made the whole process a lot easier. Can't wait to work with him again!

How did you become attached to Gallows Hill?

I got the script back in February last year. I read it and had a meeting with the producers where I pitched them my vision for it and the direction I'd like to take the story to. They liked my thoughts and offered me the movie.

What was it like shooting Gallows Hill in Columbia?

Colombia has all the visual elements we needed to tell the story, plus the most amazing house we could've dreamed of was there just waiting for us. People over there are great, warm and hard workers and they really managed to help me capture the vision I had in mind for Gallows Hill even with the minimal budget we had to accomplish such an ambitious script.

The rain. Did you have to make special accommodations because of the rain or did you pick the season in particular because it gave a desired movie effect?

The rain was a very important element in the script that I decided to enhance and keep through the whole story. It's a beautiful cinematic element that looks great in film and adds a lot of drama to the story. The actors had a hard time with, but the final picture looks awesome and I can't thank them enough for their commitment.

Did it make it harder to shoot for everyone? Some of he set pictures indicate that it may have been quite cold?

As I said before, it was very hard for everybody but especially for the actors. There's one particular sequence we shot in a lake. The shooting had to be done at night, it was freezing cold, we had the rain bars working and Peter and Sebastian had to dive in that lake for what I'm sure it seemed hours to them. They were real troopers.

Peter Facinelli described in an Interview that he didn't know Spanish very well and that onset instructions like "action, cut" etc proved a challenge at times but were also fun. Does a bilingual cast make it more difficult for you or how do you handle these situations?

I'm used to work in English but that's not my language, so it was actually easier for me as I could communicate very easily to the crew in Spanish, and then go to the actors and try to get myself understood in my broken English.

What’s in the pipeline for you after Gallows Hill? Any exciting projects?

A couple of things going on right now. I'm very excited about the "Crawl to Me" graphic novel adaptation I will probably shoot in Barcelona with Rodar y Rodar. It's an amazing graphic novel by Alan Robert and having the producers of The Orphanage backing me up makes me feel I'm in real good hands.

What qualities do you think you need to become a director?

Passion, patience and a little craziness.

Have you ever worked as an actor and if not, would you ever want the chance to?

I've never worked as an actor and I can't see myself getting into it in the near (or distant) future, but I do have a cameo in all my movies.... and Gallows Hill is not an exception ;-)

Peter told in an interview he got Pizza on set. Did you also got a piece of it?

No, I didn't... I guess I should learn how to use twitter more efficiently... it worked for him!

We are all excited watching the movie! Do you know which cinemas Gallows Hill will be distributed to?

That I don't know. It's still early in the game to know where the movie is going to get distribution at this point.