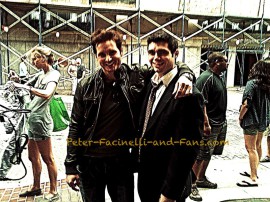 Can you tell us a little  bit about yourself?

I'm a filmmaker, actor, writer and I also fancy myself as an ameture dinosaur hunter. Okay, the last part isn't true, but It'd be pretty cool. I love making movies in my hometown because we have a real tight crew, we know all the people and if you like Italian food, it's the best. I'm from Rhode Island, which is the smallest state in the US. We have a great way of getting things done and it's been a pleasure to welcome some really big names to our little state.

You play dedective Jeffrey in „Loosies’ Can you tell us a little bit about your character? What are his motives?

Detective Jeffery is basically Lieutenant Sullivan's (played by Micheal Madesn) right hand man. My mission is to assist Lt. Sullivan in capturing an illusive pick-pocket, Bobby.(played by Peter Facinelli) Bobby has been running ramped through the streets of New York City and he keeps slipping through our fingers. So we do whatever we can to try to stay one step ahead of him -- and it ain't easy.

What was it like to work with Peter Facinelli?

Working with Peter was certainly one of the highlights of my carer so far. I grew up watching Peter in films like "Can't Hardly Wait", so I always new he was a really talented actor, but what I learned on Loosies, was that he was also a really talented writer and had a great vision of what he wanted his film to look like. The character Bobby was inside of him and it was great to watch him bring it to life. Being a writer myself, I really looked up to him and was able to learn a lot from watching him do his thing on set. Plus he's a really fun guy to be around, keeps it really light between takes and is a real workhorse.

What are your upcoming projects? Can you give us some details?

I have two films that are coming out in 2013. I'm really excited about both of these great projects. "Infected" is a zombie tale of a father son camping trip gone horrible wrong. I pay along side Michael Madsen, WIlliam Forsythe and Christy Romano. It's a real action packed rock and roll zombie flick. Then I have my directorial debut Self Storage coming out, which I also wrote and starred along side Eric Roberts, Jonathan Silverman and Michael Berryman. I had the time of my life making this film, it's a real love letter to the films I grew up watching. I also just wrote a screenplay called "The Cellar Door" which will be rolling into production later on this year.

If you could produce another movie with Peter Facinelli. Which genre would you choose?

I would love to do some kind of crime drama with Peter. Some kind of gambling brothers on the run, type of thing. That would be a lot of fun. Kind of a throw back to the gritting films of the 70's and early 80's.

If you could choose another role in ‚Loosies’ which one would you choose and why?

That's a tough one, there are so many great characters in the film. I think I'd want to play Jax. He's the villain in the story and it's always a lot of fun as an actor to let loose and play the bad guy. Although, those would be big shoes to fill, because Vincent Gallo turned in an amazing performace in the film. He was a lot of fun to watch.

What were your first impressions of the Loosies script and how did you prepare for the role?

I was really excited as soon as I read the script, because there were so many great roles a young actor like myself could have jumped into. Plus the writing was top notch. The pacing was like a train and the characters were really likable, even the bad guys. When I was cast as Detective Jeffery, I was pretty happy because I had just come off a film called "Inkubus" with Robert Englund, where I had played a rookie cop, so now that I was a detective, I guess I got a promotion. I actually did a ride along with some Providence Police officers. It was really helpful, cops carry themselves in a very specific way, always on alert, always ready for action, so it was great to incorporate their behavior into the character.

What has been your highlight of 2012 so far?

I would probably say making my film Self Storage. This was the first screenplay I had ever written, straight out of film school, so it had been playing in my head for several years. To finally get the opportunity to put it on the screen was a real dream come true.

Self Storage is being released next year and you directed this movie. How much of a challenge was it for you and did you enjoy it?

I owe the people at the Monster Energy drink company a debt of gratitude. Directing and Acting in the same project was the biggest challenge of my life thus far, but it's all about testing yourself. I story was kind of in my DNA so I knew it inside and out, which was really help-full. Plus I had a lot of support from my producing partner Chad Verdi, Executive producers David Lussier, Sherry Lussier and the rest of the Woodhaven Team. I would definitely love to take the challenge again. I grew up idolizing actor directors like Sylvester Stallone, Quentin Tarantino and Ben Affleck, so it's a real thrill to have an opportunity to tell my own stories.

What would be your ideal role acting wise?

I'd have to say Elvis Presley. I'd love to play him in his later years. He was a real tragic character and there is a real moving story to be told about his last few years. I would love to some day bring that beautiful and truly human story to the screen.