interview with the hillywood show

creator, producer and director of some awesome movie parodies june 26 2012 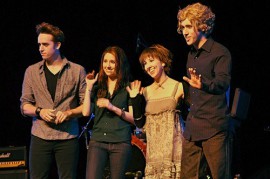 Can you tell us a little bit about yourself?

Our names are Hilly & Hannah Hindi and we are the Creators/Directors of The Hillywood Show.  We have been creating productions for the past six years over the web.

Before you have made your first video where did you get the inspiration and how did you realize your dream to create these awesome videos?

Hilly began creating home made videos since the age of nine.

We discovered that we just love to entertain and create at a very young age.

How long does it take to put a video together. From the beginning of the make-up until cutting everything?

It just depends on the size of the project.

You are working together with Peter Facinelli. How came you together and what will we expect the next time?

Peter discovered us while at Creation Entertainment's Official Twilight Convention.

He watched our NEW MOON PARODY and began to ask questions on how it was created. He asked for our business card and that was about it.

We were happy just to know he enjoyed it thoroughly.

However, a few months later, we got a call from Rob Defranco and Peter informing us that they believed in us and would like to help Hillywood!  It was awesome.

What do you like the most about Peter Facinelli?

He is a very down to earth person.

What’s the best experience you have made during your increasing success of your work?

It brings everything together for us.

Without them, we wouldn't be where we are today.

What’s the most impressive moment you have experiences through or with a Fan?

Well...I guess we can say, we have had fans begin to cry when they meet us.

That is impressive because we honestly feel like we are nobody!

However, it does bring a smile to our face to know how much we mean to them.

If you would make a movie together with Peter Facinelli what theme would it be and why?

It would be awesome to have Peter make a cameo in one of our parodies!

We can think of some fun ideas.

You have reached the top of your career. Would you miss the time at the beginning, your little projects?

However, we would be so thankful to the fans for getting us to where we would be. It's because of them that all of this came about.

If you have to make a parody of the  „Grimm Fairytales“ Which Story would you choose?

Hmmm...probably Snow White and the Huntsman.

Yes, because not only is he a busy professional actor, he also has time for charity events.

That is so inspiring to us.

Can you tell us a little bit about your upcoming projects?

We will be releasing an Original Music Video Single in July 2012!

It's something new and exciting for us!﻿﻿