known from The Campaign, Hot Tub Time Machine 2, Get on Up, and TV Shows like The Vampire Diaries and Bonnie & Clyde. February 21 2017 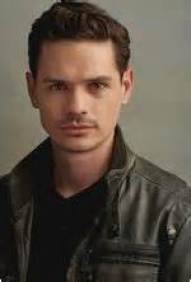 Can you tell us a little bit about yourself for the fans who don't know you?

As well as being an actor, I'm also a writer/director/producer.

I have a few films coming out soon; Go Crazy Go Mad,

and URDYE are on the horizon! I'm very excited about people being able to enjoy them.

You have played a Vampire in 'The Vampire Diaries'.

What was the most unforgetable part of it?

Probably that despite never actually getting bitten. I still left set with a considerable amount of Joseph Morgan's spit on my neck.

Peter Facinelli played Carlisle Cullen in Twilight. Which Vampire would you like to be in that movie?

I think I'd have been Edward Cullen. I'd have loved to carry the whole series!

Do you think there are Vampires similar to the Twilight Saga or is there nothing in common?

After living in New Orleans for three years I'm not so sure Vampires DON'T exist! There's some pretty convincing history to them.

You have met many new fans at Weekend of Vampires Convention in Germany.

What was the best part of it?

Honestly, I was a bit nervous to go to a foreign language speaking country by myself, but the best part was the warm reception from all the german fans and their willingness to do their best to speak to me in english, and listen to my terrible german. ;)

If Peter Facinelli would ask you to do a movie with him, which Genre would you choose?

I think I'd definitely do a thriller with him. He's great at characters that aren't quite 'right' and I love them too!

Was Weekend of Vampires your first convention? If not, what's the difference between american and european conventions?

Weekend of Vampires was my first!

What did you like the most about the german country side?

I really can't wait to come back and see it again. I didn't get to see enough last time.

Can you tell us a little bit about your upcoming projects?

Go Crazy Go Mad is a super low budget Romantic Dramedy where I play Eckland, a straight laced, nerd in a troubled relationship. I star in the movie with Ashley Lenz, whom I also wrote and directed it with.

URYDE is my first solo writer/director debut. I'm VERY excited to share this movie. I think the german thriller fanbase will love it! It follows Brandon, played by me, who drives for a rideshare company. One night he picks up a guy named Judd and the night takes some unexpected turns.

If you can choose an actor to do a movie with you, who would be your favorite?

I really look up to Christian Bale. I can't wait to do a movie with him.

What do you appreciate the most on Peter Facinelli?

Peter was very down to earth, despite being a vampire superstar!

Did you learn any new german words? Do you like the german language?

I took four years of german in high school, so I was pretty familar with the language. I love speaking it and wish I was fluent!

At this point in my life I am very grateful for the opportunities I've had and wouldn't do a thing to change them.

If you can meet one person (dead or alive) to change the world to a better place who would it be?

I will choose one of both:

Dead - Nikola Tesla. I think he was the mad scientist that would have revolutionized the world (more than he already did)

Alive - Elon Musk. He's truly walking in the shoes of Tesla with the same world-betterment mentality as Nikola.